The bands are on sale for £2 at the Byres Road shop this weekend.

A long year of cancer treatment has given Jason Robertson hope of a better future.

The assistant manager at Cancer Research UK's shop on Byres Road knows more than most about the illness.

He was diagnosed with bowel cancer in December 2017 and it's been a long haul since. 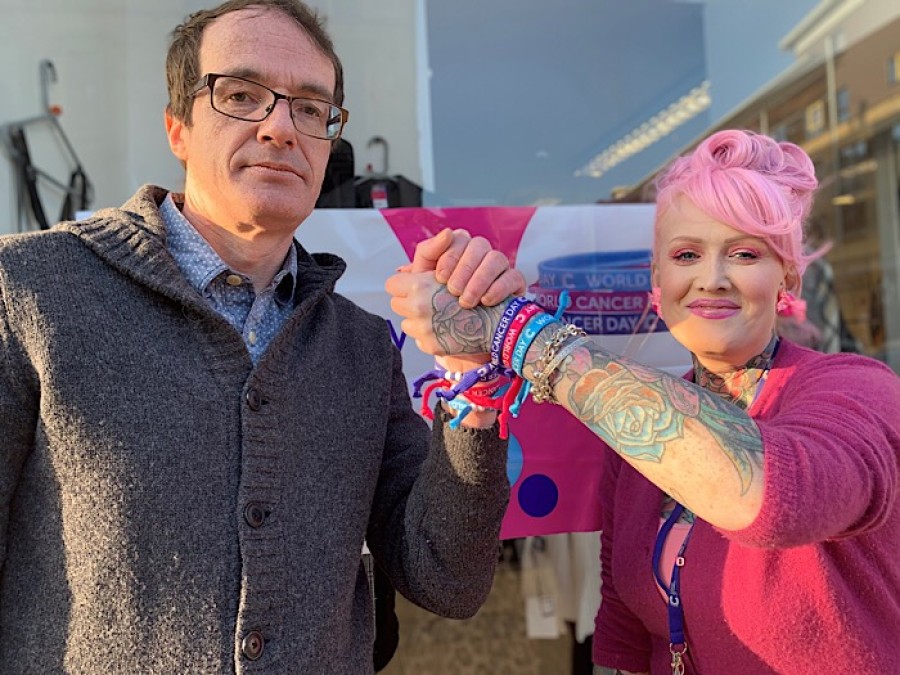 But he is now joining colleagues to mark World Cancer Day this Monday (February 4).

The bands are on sale for £2 at the shop this weekend.

Ahead of the world day, Jason, 53, from Knightswood, said he had had great support from friends and family.

He said: “Cancer is incredibly tough but so many people are affected by it.

“I’ve been fortunate to work in Cancer Research UK shops for around 15 years and the staff and volunteers I’ve met in that time are special.

"I appreciated the chance to hear about everything that was going on in the shop when they visited me in hospital.

"I’m hoping 2019 will be the start of a healthier future for me and for so many others who are going through the disease.

"I want everyone in Scotland to wear a Unity band on World Cancer Day.

"Just by wearing a Unity band, everyone can help make a real difference to people with cancer." 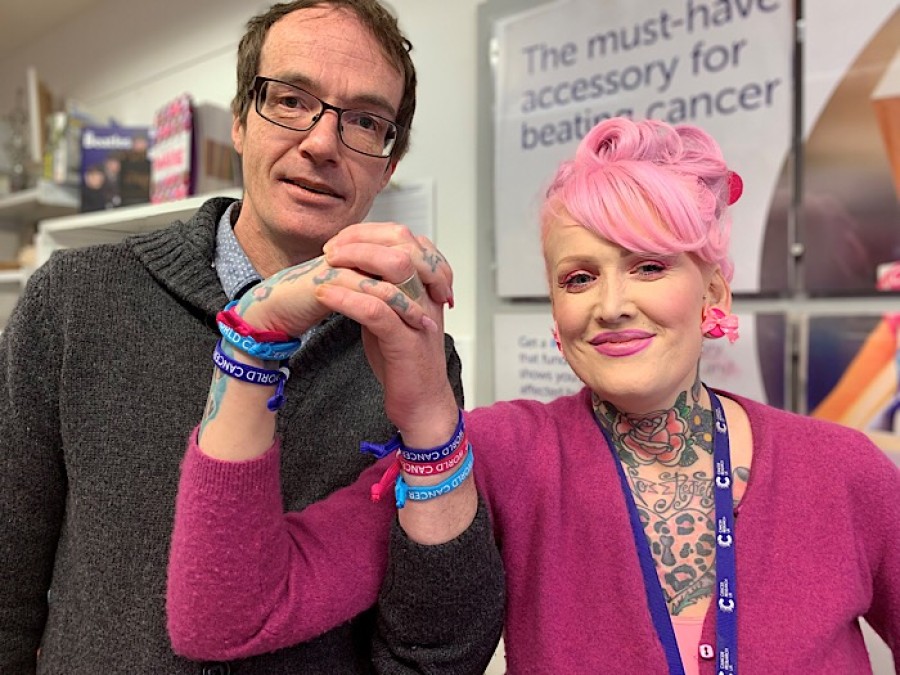 Support: The team want people in Scotland to wear the Unity bands

Scotland has one of the highest rates of bowel cancer in the western world.

It is the third most commonly diagnosed cancer in both men and women in Scotland with around 3,700 new cases diagnosed every year.

He was diagnosed with bowel cancer after first visiting his doctor with symptoms including tiredness and blood in his stools.

It was a hammerblow after chemotherapy and radiotherapy last spring failed to get rid of the tumour.

It took surgery to stem the disease - but his recovery was delayed by sickness.

His final chemotherapy session was on October 31 last year and he is currently recovering from this surgery.

He said: “It’s been a long journey but I’m getting there.

“I’ve got some brilliant family and friends.

“It’s been a long journey but I’m getting there. I’ve got some brilliant family and friends"

"To anyone going through cancer I’d say try not to over think things, take the support that’s out there and trust that the doctors will get you better.”

One in two people born after 1960 in the UK will be diagnosed with the disease at some point in their lifetime.

The good news is, thanks to research, more people are surviving than ever before.

Survival has doubled in the last 40 years in the UK and Cancer Research UK’s work has been at the heart of that progress.

She said: “We are very grateful to Jason for his support to show how important it is for everyone to wear a Unity band on World Cancer Day.

“It is a powerful accessory in the fight against the disease.

"Today as many people survive cancer as die from cancer, but there’s still much more to do.

"We’re working every day to find new ways to prevent, diagnose and treat the disease.

"By making a donation of just £2, people across Scotland will be able to help fund world-class cancer research to help more people, survive.

"Together, we will beat cancer.”

Staff and volunteers from Cancer Research UK will be taking part in collections at Tesco in Byres Road, Glasgow this Saturday February 2 and Sunday February 3.

Unity Bands are available in all Cancer Research UK shops across Scotland and online at cruk.org/worldcancerday