Jamie MacLean joined in the national applause for all frontline workers fighting the coronavirus pandemic.

The piper whose stirring rendition of Scotland The Brave went around the world said his tribute to NHS staff was 'the least he could do'.

Jamie MacLean, 26, picked up his pipes on Thursday night and joined in the national applause for all frontline workers fighting the coronavirus pandemic.

His march up and down Ruthven Street in the West End of Glasgow where he lives was filmed and shared on social media.

Jamie's playing on Ruthven Street was seen by thousands of people around the world. Credit: Archie Coulter.

It was seen tens of thousands of times and featured by news outlets around the world including the BBC and ABC News in America.

Jamie is no stranger to making waves, however.

He is one third of the record-breaking trio of brothers who successfully rowed across the Atlantic Ocean earlier this year.

He had only recently returned to Glasgow after the gruelling expedition and was looking for a job when the pandemic struck.

He said he was spurred on to perform by friends working on the frontline.

Jamie told Glasgow West End Today: "One of my flatmates is a doctor who works at one of the hospitals in Glasgow.

"She is on the frontline every day - and my girlfriend had flagged up that pipers across Scotland were being invited to play.

"I have played the pipes for a long time now and it seemed like an obvious thing to do.

"It was my way of showing appreciation to all the people who are working so hard, when we are stuck at home twiddling our thumbs." 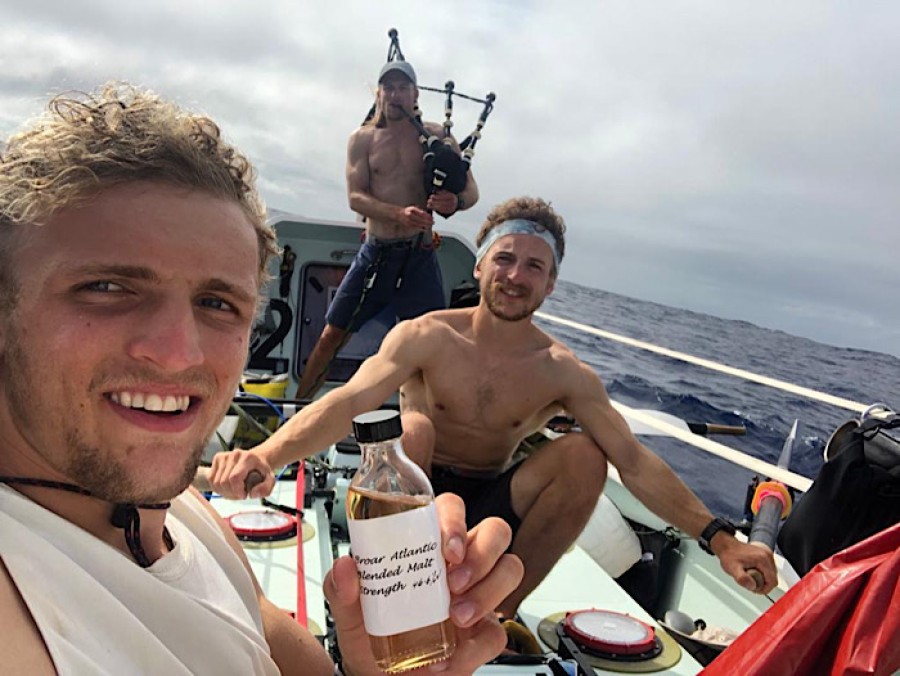 Jamie (back) with brothers Lachlan and Ewan. Photo: Broar

Jamie has busked before and has taken his pipes overseas before.

"Quite a few of my friends play the bagpipes and we did a trip in a van.

"We drove it around Europe and busked from city to city - paying our way as we went along.

"We did a similar thing in America.

"I have spent quite a lot of time playing in public spaces so it wasn't too much of a shock to the system to play the other night.

"It was the least I could do. It's nice the video has gone far and wide.

"It was my way of saying thank you to all the frontline workers."

Jamie's playing was filmed by neighbour Archie Coulter on his phone and shared on social media.

Archie, a medical registrar, was delighted the tribute had been seen by so many people.

His tweet said simply: 'Piping for key workers in the West End of Glasgow.'

Piping for Key Workers in the West End of Glasgow #clapforkeyworkers pic.twitter.com/akPMEnIw9P

Jamie, Ewan and Lachlan MacLean are the first three brothers to row any ocean, and the youngest trio and the fastest trio to ever row the Atlantic.

They set off from La Gomera, in the Canary Islands on 12 December and completed the 3,000-mile trip to Antigua in 35 days.

Jamie said the row had prepared him mentally for the lockdown.

"I was in the process of getting a part-time job, but I'm just biding my time with everybody else.

"Funnily, we had more to do on the boat than we do in lockdown.

"We had to hydrate at the right times and we had to stick to a routine.

"If you break down the lockdown day by day or week by week it is definitely more manageable."