The return of the scheme follows a successful pilot project last year that attracted great response from the public.

If you live in the West End of Glasgow but love life by the water - then this might be the perfect project for you.

Volunteers are being sought to care for Glasgow's historic Clyde & Forth Canal - being trained to open lock gates, carrying out repairs, painting and litter-picking.

The 'Love Your Canal' adoption project is run by Scottish Waterways Trust, Scotland’s only national waterways charity, in partnership with Scottish Canals.

The canal bodies hope to build on the project which will run between Friday and Monday each week from Saturday March 25 until the end of October.

Under the scheme, people are offered the chance of making a real difference to the environment while having fun, meeting new friends and learning new skills.

The project will be based at Maryhill running from Locks 21 to 27.

The hope is the project will move further afield as the scheme progresses.

Just like traditional lock keepers on the 250 year-old waterway, the volunteer team will be trained to open locks for passing boats whilst also helping to repair canal stonework and masonry, painting and improving the environment along the canal.

The charity aims to run a number of workshops for volunteers which could include learning about wild plants, bumblebees and an Emergency First Aid course. 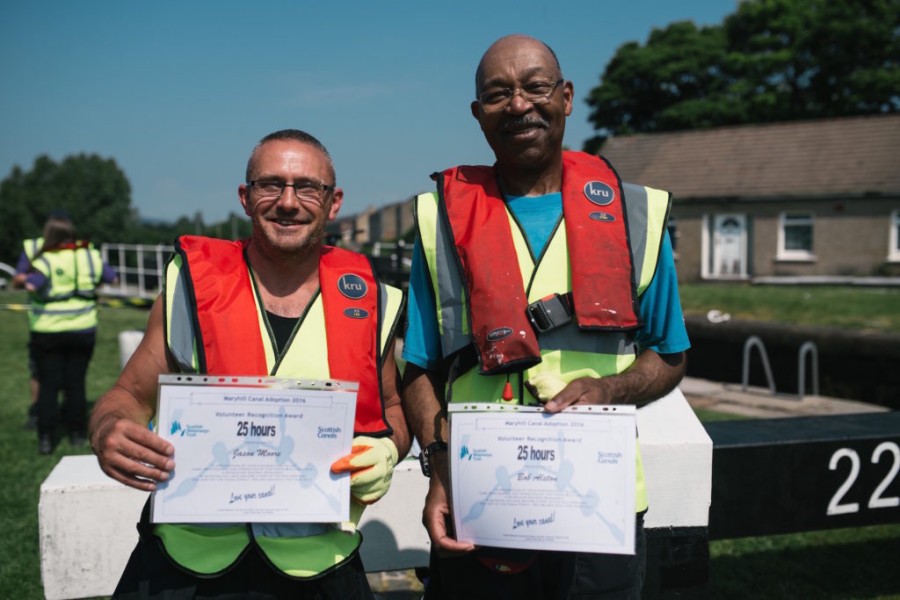 Awards: Participants in the volunteer project come away with a certificate. Photo credit Peter Devlin.

After full training from Scottish Canals waterway staff, the volunteers will be able to help Scottish Waterways Trust and Scottish Canals to open the locks for boats travelling west to Bowling, east to Glasgow city centre or across country to The Kelpies at Grangemouth or Edinburgh via The Falkirk Wheel.

Volunteers will also be put forward for awards such as the John Muir Discovery Award and Heritage Hero Award as well as certificates of competency for training in areas such as water safety and lime mortaring.

“I didn’t know what to expect.

"For me the best part was the lock-keeping, we were trained and out of all the boats we moved through the locks I was involved with almost all of them.

"I am a lock-keeper now! It’s a great project.”

Tracey Peedle, Development Director, Scottish Waterways Trust, said: “We were overwhelmed by the resounding success of our ‘Love Your Canal’ project last summer, and are delighted to be bringing the project back to North Glasgow, with the support of our partners Scottish Canals.

"The ‘Love Your Canal’ adoption project is a great volunteering opportunity for those looking to try something new and learn new skills whilst connecting with our vibrant canal heritage and biodiversity.

"For me the best part was the lock-keeping, we were trained and out of all the boats we moved through the locks I was involved with almost all of them.

"I am a lock-keeper now! It’s a great project.”