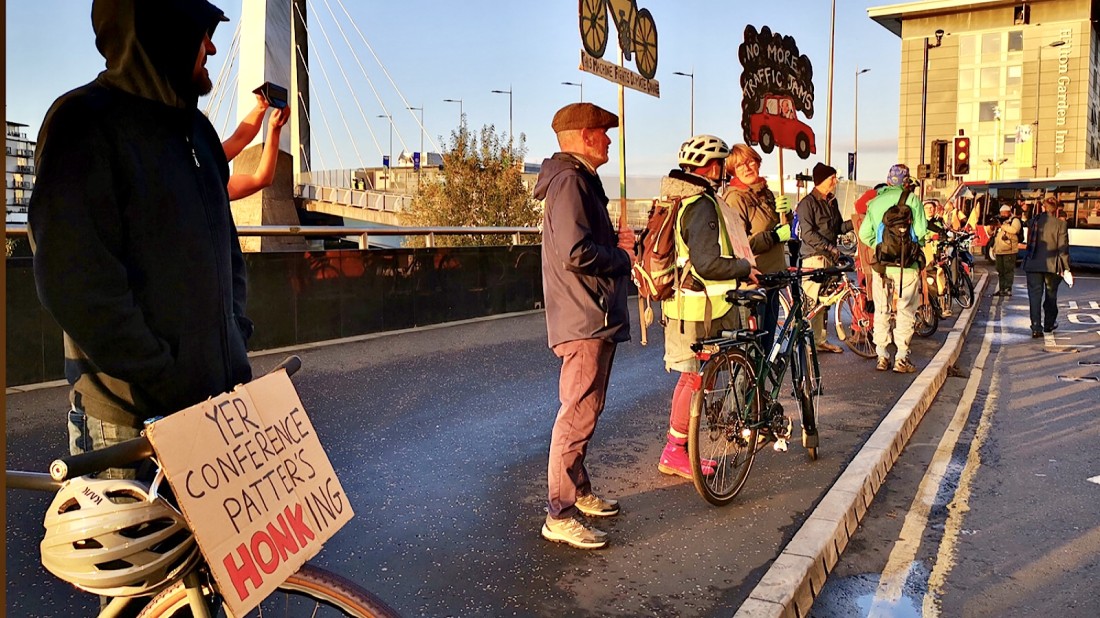 Cyclists say that active travel is not even up for discussion at COP26.

Cyclists have held a placard protest outside the COP26 climate talks.

More than a hundred cycling activists, campaigners and residents marked Transport Day at COP26 with a line of people with bikes stretching along the River Clyde to the conference.

They were angry that active travel and cycling did not appear to be up for discussion.

People of all ages stood peacefully along the side of the road asking that active travel is recognised at the conference as a part of the solution to the climate crisis.

Passersby were greeted to the sound of bike bells ringing as they walked along the riverside.

Delegates stopped to take photos and ask protesters why they were there.

Cycling commuter Victoria with her two children (aged nine and 11) said: “We wanted to join in today to support GoBike with their message to COP26 delegates.

“Safe active travel for everyone, young and old, needs to be a realistic option for more people, and the politicians making the decisions are the ones who need to make that a reality.”

Another cyclist, Emily, joined the protest on the way to drop her two children at school.

She said: “Buying a cargo bike in order to live car-free has been the most satisfying and joyful thing our family has done to limit our own environmental impact. 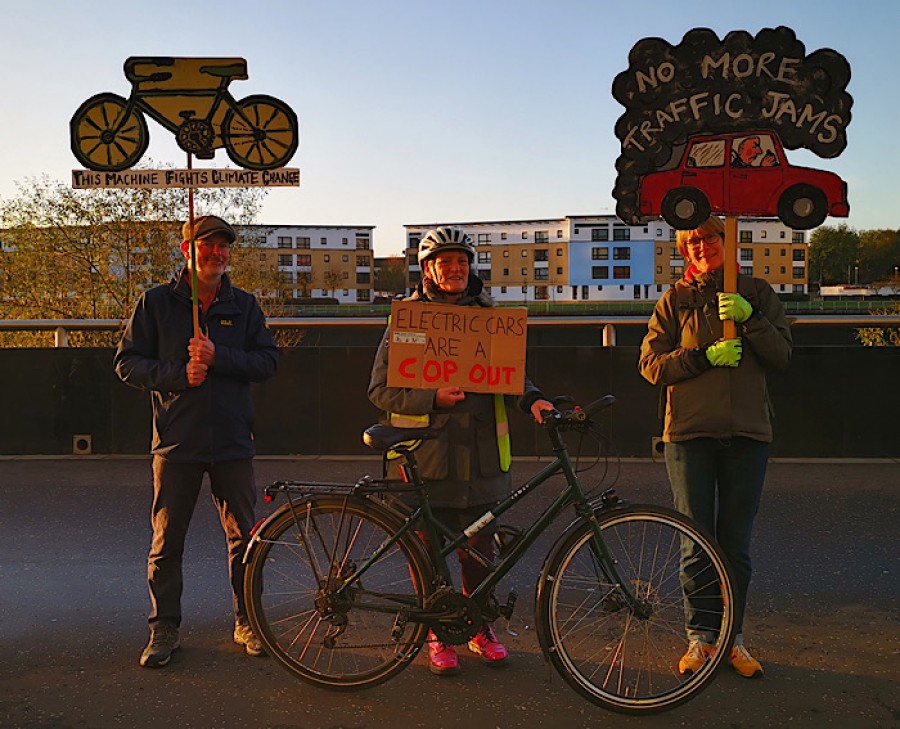 Cyclists say active travel was not even up for discussion.

Organiser Iona Shepherd from GoBike and Pedal on Parliament said: “Today is ‘Transport Day’ at COP26 and active travel is not even on the table for discussions.

“At the conference electric cars are taking centre stage, while our sustainable form of transport - by far the cheapest and easiest way to cut emissions from transport - doesn’t even get a mention.”

She said” “Transport is now the UK’s biggest contributor to climate change, yet nearly half of all journeys by car in Scotland are less than two miles.

“These are journeys that for many people could be swapped out for walking or cycling, if the conditions were made safer and more attractive.

“Meanwhile, the UK government are cutting the cost of car ownership.

Safe active travel for everyone, young and old, needs to be a realistic option for more people, and the politicians making the decisions are the ones who need to make that a reality

“We need the COP to force through better investment and political will for sustainable transport modes if they are serious about the Paris Agreement to limit warming to 1.5 degrees.”

Convenor of GoBike Thomas Cornwallis said: “After a long campaign and a lot of volunteer work to bring a petition to the council to make sure cycling was accessible, safe, and direct for people of the city and delegates during COP26, it was very disappointing to see how poorly the cycling diversion route was handled with signage taking over two weeks to appear, and with no accessible way to pass barriers.

“If cycling is to help us with the climate crisis, it needs attention and not left on the side."

A spokesperson for Get Ready Glasgow said: “Partners have had several meetings and correspondence with Go Bike over the course of the planning for COP26.

"As a result our transport planning team worked to include some of the changes and interventions that Go Bike had suggested, where it was possible to do so, without comprising the security of the event and disproportionately affecting other road users. 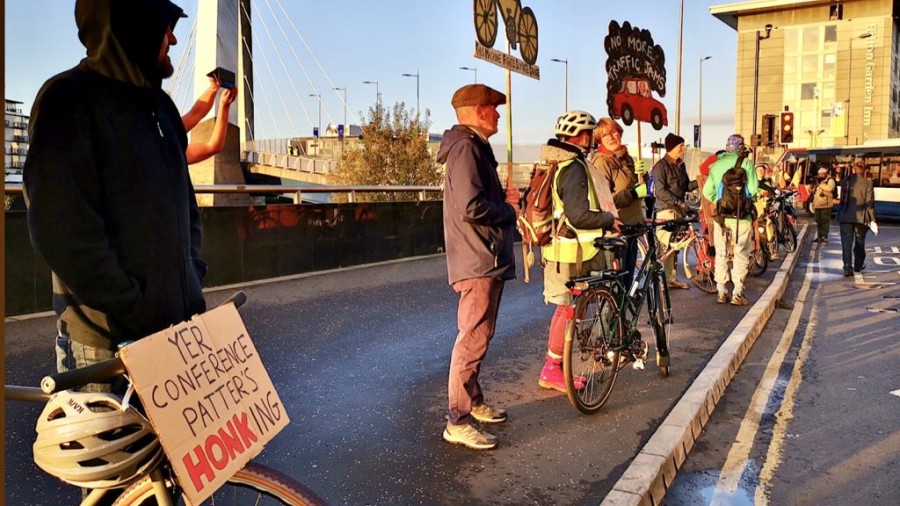 GoBike is also unhappy at the cycle diversions put in place during COP26.

“We have been able to agree to soft segregation sections, at their request, in some locations.

"Again, we have to balance Go Bike’s requests with the needs of all road users and pedestrians, and businesses and residents in the area concerned too.

“During COP26 we are looking to encourage active travel among delegates and visitors as well as our citizens. An active travel map has been produced and COP26 wayfinding signage will help people navigate their way around the city.

"There are security road closures and restrictions, but alternative routes are available and signed, to re-connect active travellers at appropriate points within the network.”

Police begin patrols of the River Clyde ahead of COP26

Waterways are being searched by specialist officers from Police Scotland’s Dive and Marine Unit.

The UK will host the international summit at the Scottish Event Campus (SEC) in Glasgow on 1 – 12 November 2021.