Return of the Ice Age … Elfingrove rink not just one-off

Scotland’s biggest ice rink is opening to the public and organisers say the attraction will be an annual event.

Scotland’s biggest ice rink will return year after year, according to organisers.

Elfingrove 2021 gets under way today with thousands of Glaswegians taking to the ice over the next three weeks.

Meanwhile, Glasgow events company itison.com made it clear that the rink is custom-designed for Kelvingrove.

That means it will be staged annually as a major attraction.

More than 40,000 tickets have been sold for the inaugural winter season.

But it is understood that upwards of another 60,000 tickets are still available.

It was built by the team behind Dancing on Ice and Somerset House. 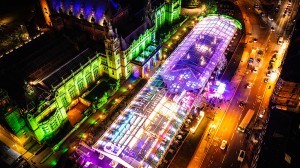 The structure is Scotland’s biggest ever ice rink, and is set against the stunning backdrop of Kelvingrove Art Gallery and Museum.

The attraction comes with food and drinks areas, and a licensed bar.

“We are here to create amazing festive and Christmas memories … and make it a thing that they look forward to year on year.”

Oli Norman is the creator of Elfingrove and CEO of itison, and he lives in the West End.

He said: “From Rockefeller Centre in New York to Ice World in Vienna, I’ve skated some of the world’s most iconic rinks.

“To create our own at Kelvingrove Museum to rival those great cities is a real honour.”

The event is set to kick off today December 2 and will run until Christmas Eve with time slots every hour between 12noon until 9pm.

Under 5s go free – under 5s can’t go on the ice due to safety reasons but can spectate or enjoy the Silent Snow Disco and all the other festivities.