Public resources have been stretched during lockdown with hundreds of people gathering in the park in warm weather.

Ten of the 16 entrances to Kelvingrove Park have been closed off with immediate effect.

Gates were shut and padlocked on Thursday morning ahead of the weekend. 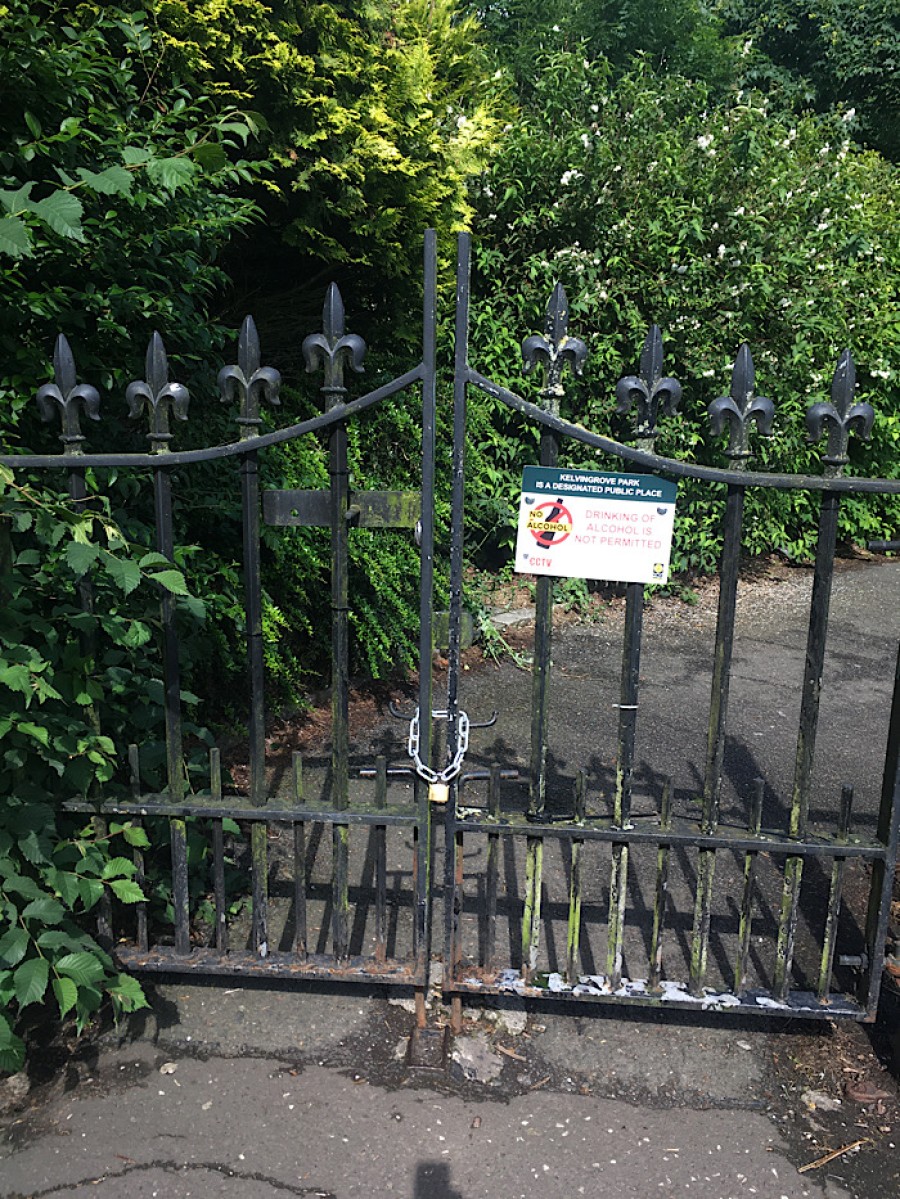 One of the gates that was closed off on Thursday morning,

Police resources have been stretched in recent weeks with hundreds of people gathering in the park in warm weather.

Despite Covid-19 lockdown restrictions remaining in place, Kelvingrove has been one of Scotland's problem hotspots.

And gatherings have also been linked to anti-social behaviour, such as public drinking, public urination, littering and disorder.

Glasgow City Council said it will staff entrances that remain open on days when the park is expected to be busy.

The measures will remain in place for the remainder of the summer season.

Visitors will be channelled through six entry points at key locations to the north, south, east and west of the park.

The access points for the cycle route NCN 756, which passes through the park, will be retained.

Anyone seeking to enter the park with alcohol will be either be asked to dispose of their alcohol before entering the park or refused entry.

Additional bins will also be sited at the open gates on busier days.

The measures will remain in place for the remainder of the summer season. Google image

Councillor Anna Richardson, city convener for Sustainability and Carbon Reduction, said: “Going to the park has been a real lifeline during the Covid-19 emergency.

"Throughout lockdown Kelvingrove Park has remained as one of Glasgow’s favourite green spaces.

"Closing gates at Kelvingrove is the last thing we wanted to do, but we have to ensure the park remains a place that everyone can enjoy and feels safe going there.

“The mass gatherings we have seen recently have caused serious concerns, not only for the lack of physical distancing being observed, but also due to frequent reports of anti-social behaviour and disorder.

"The amount of waste that we regularly remove from the park, much of it linked to alcohol consumption, is also staggering.

“Limiting the number of entry points to the park means that on very busy days we can manage access more effectively, ensuring the park management rules are applied to all visitors.

'Closing gates at Kelvingrove is the last thing we wanted to do, but we have to ensure the park remains a place that everyone can enjoy and feels safe going there.

'The mass gatherings we have seen recently have caused serious concerns, not only for the lack of physical distancing being observed, but also due to frequent reports of anti-social behaviour and disorder'

"Taking this necessary step will help to keep Kelvingrove as a welcoming place for all.”

The changes to park access is a part of a wider effort to ensure Kelvingrove Park is safe for all visitors.

Additional bins will be stationed at gates and mobile CCTV in the park will be enhanced.

Discussions on the feasibility of adding to the park’s four permanent cameras are also underway.

Licensing standards officers are liaising with local licensed premises to ensure that licence holders are continuing to sell alcohol responsibly.

Meanwhile, the council is working with youth services providers across the north-west of Glasgow to ensure enhanced engagement with young people in the area.

This work will involve identifying alternative activities in local communities.

Chief Inspector Morag Lister, area commander at Greater Glasgow Division, said: “Kelvingrove Park has recently been home to some deplorable scenes of violence, disorder and antisocial behaviour, including officers being assaulted in their endeavours to keep people safe.

“There is a minority group who are intent on using the park for purposes other than recreation and we have been working in close collaboration with Glasgow City Council to mitigate the risk that this group poses to the park’s long-term sustainability and its thousands of other users.

"Sadly, those mitigation measures have resulted in the majority of the park’s entrances being locked as a result of the behaviour of this minority group.

"The chief constable has made it clear that we are asking people to take personal responsibility to do the right thing and remember the purpose of these measures is to aid the collective effort to stay safe, protect others and save lives by preventing the virus from spreading.

"Our officers will continue to engage with the public, explain the legislation and guidance and encourage compliance. We will use enforcement as a last resort only where there is a clear breach of the legislation."

The last remaining apartments at the prestigious Park Quadrant Residences in the Park area of the West End are now available.