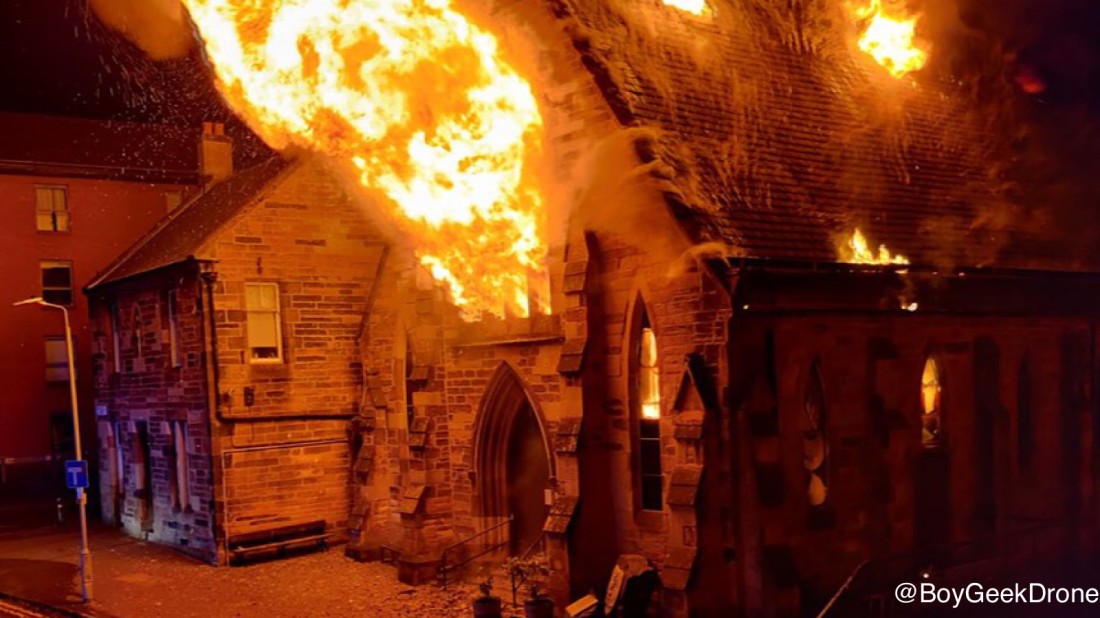 Neighbouring residents in and around Partick Bridge Street were evacuated.

A fire has destroyed one of Glasgow’s oldest churches.

The devastating blaze at St Simon’s Church in Partick took hold in the early hours.

Witnesses said the building was destroyed within minutes of the fire service arriving.

The alarm was raised around 2.40am on Wednesday.

Neighbouring residents in and around Partick Bridge Street were evacuated.

Reports said one person was assisted from the building and given precautionary treatment at the scene.

Melissa Moore, a PhD researcher in the engineering department at Glasgow University, was told to leave her flat.

She told Glasgow West End Today: "We woke up as the fire trucks arrived. That was about 2.45am.

“We grabbed valuables and the dog and went outside.

“By then there were at least four trucks battling the blaze.

“Fire roared out what had been the stained glass window as the roof began to catch at 3am. 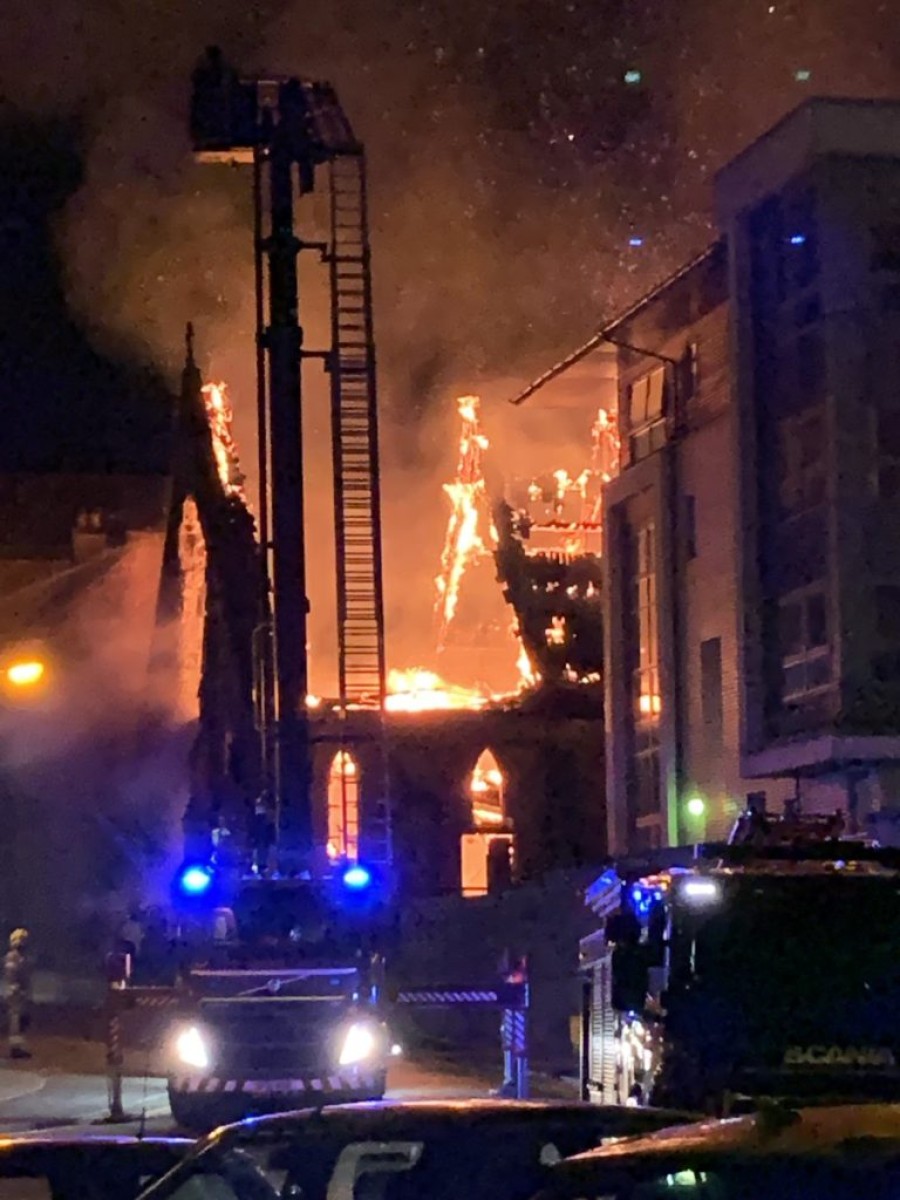 The church was quickly engulfed by flames. Photo: @aimeeeef (Twitter)

“Holes began to open in the roof shortly after and by 3.30am the whole thing had caved in.

“The adjacent buildings were evacuated as there was a risk if fire damage but it seemed most people had returned by 5am.”

Video and images posted on social media showed flames bellowing from the church windows and roof.

The area is densely populated with student and private apartments.

Another witness said the blaze was rapid and it appeared little could be done to save the building.

Replying on Twitter as @BoyGeekDrone, the witness said: “The fire was ferocious and spread quickly to engulf the building despite the efforts from the fire service.

“The roof started to collapse with 30 to 35 minutes and heavy masonry started to drop to the streets.

“The adjacent building had to be evacuated as jets of flame seemed to be a real risk for the fire spreading.” 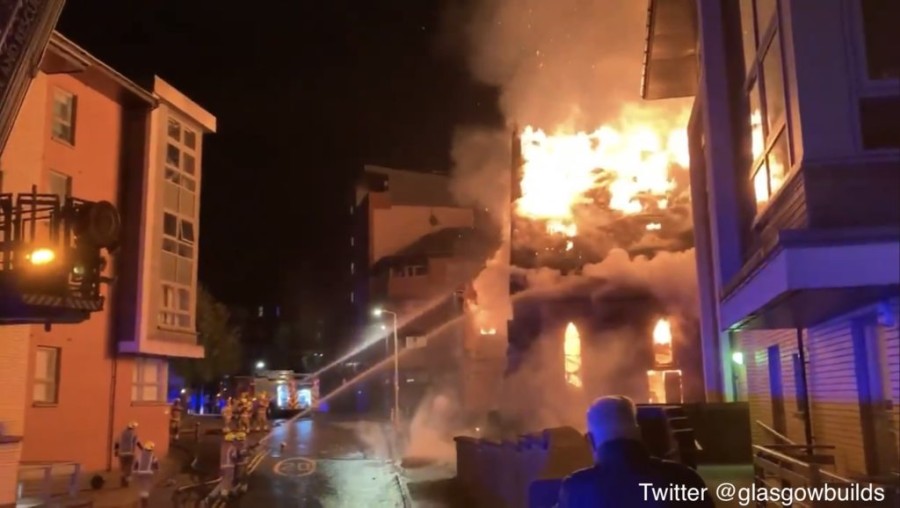 Up to 30 firefighters were at the scene.

Partick resident Aime Foote said: “My flat mate woke me up around 2:30am because she heard glass breaking and looked outside and saw the flames and came and woke me up.

“You could feel the heat and smell the smoke as soon as you stepped outside.

“Because of where the flats are and where the church is we couldn’t get out the exit and had to go through the underground car park.

“Everyone was cornered at the bottom of the cul-de-sac and had to just watch the church become engulfed by the flames. It was like something out of a movie.

“Then the roof completely collapsed.”

St Simon’s Church is said to be the third oldest Catholic church in Glasgow.

It was known locally as the ‘Polish Church’ due to the Polish soldiers stationed in Glasgow who attended during the Second World War.

Glasgow MSP Pam Duncan-Glancy was among those who reacted to the news.

She tweeted: “Devastating scenes. Thank you to the Fire Fighters who have worked tirelessly to bring the fire under control.” 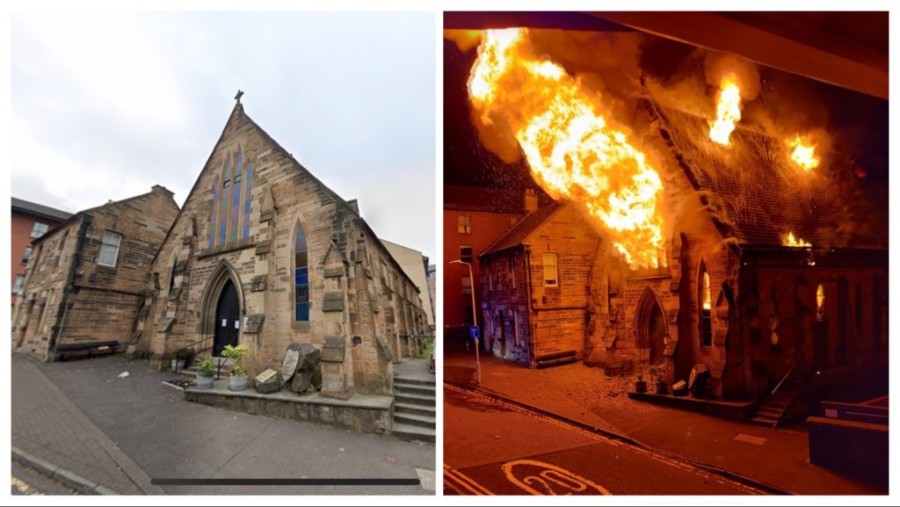 St Simon’s was a B listed church built in 1858. After temporary closure due to lockdown restrictions it has been operating in recent weeks with daily services, and Masses for the Polish community on Sundays.

A spokesman for the Archdiocese of Glasgow said: “The destruction of St Simon’s church by fire will be a blow to people far beyond the west end of Glasgow. Though small in size, St Simon’s was well-frequented and was the spiritual home of the Polish community in the west of Scotland who had established a shrine there.

“It was also a focal point for the local community, and especially the homeless who benefited from a café on site which had to be suspended during the pandemic.

“The church of St Simon’s is linked to the larger parish of St Peter’s in Partick and worshippers will be accommodated there.

“The cause of the blaze is not immediately apparent, but we will work with the Fire Service as they investigate the site. Structural engineers are on site to advise on the necessary measures to make the remains of the building safe."

“St Simon’s was a much-loved landmark at Partick Cross and its loss is a heavy blow.”

Robert Hynd, Moderator of the Presbytery of Glasgow (Church of Scotland) said: “It is tragic to see such damage to a proud and historic church building.  St Simon’s has an important place in the life of Partick and is particularly loved by members of Glasgow’s Polish community.

“Our thoughts and prayers are with the congregation of St Simon’s. Denominations are meaningless at times such as this and we will offer whatever support we can to help in their recovery from this tragic event.”

Police appealed for information saying their investigation is at an early stage and they cannot speculate as to the cause.

Chief Insp Natalie Carr said: "This remains a multiagency incident and due to the fact that the building is unsafe, at this time neither Police nor Scottish Fire and Rescue officers have been able to get in to the church to establish how the fire started.

“Enquiries are very much at an early stage and we cannot speculate at this time as to the cause.

"We are also working with the Archdiocese of Glasgow and Glasgow City Council with regard to the welfare of those who use the church and local residents some of whom will not be able to return to their homes until the building has been made safe.

“We are aware this fire will be devastating to the local and indeed wider community, and along with our partners we will continue to support our communities.

“Additional officers will be in the area and I would encourage the local community to engage with these officers should they require assistance or believe they may have information to assist any of the agencies involved.

"We are keen to hear from anyone who may have been in the area of Partick Cross and Partick Bridge Street on Wednesday morning, particularly around 2.30am and 3.00am.

“Also, if you happened to be driving in the area, including along Dumbarton Road, at that time and have any dash cam footage, then please get in touch with police.

“Anyone with information can contact Police Scotland through 101, quoting incident number 0417 of Wednesday, 28 July, 2021. Alternatively you can call Crimestoppers anonymously on 0800 555 111.”