A daily supply line of meals and sandwiches is being dispatched by the team at the West End deli to homeless people.

As is often the way now, it was a social media post that sparked a response.

When staff at Eusebi Deli saw a volunteer street team calling out for help to feed homeless people in Glasgow during the lockdown, they knew they could assist.

Less than a week later, a daily supply line of meals and sandwiches is being dispatched by the team at the West End deli to the city’s most vulnerable people. 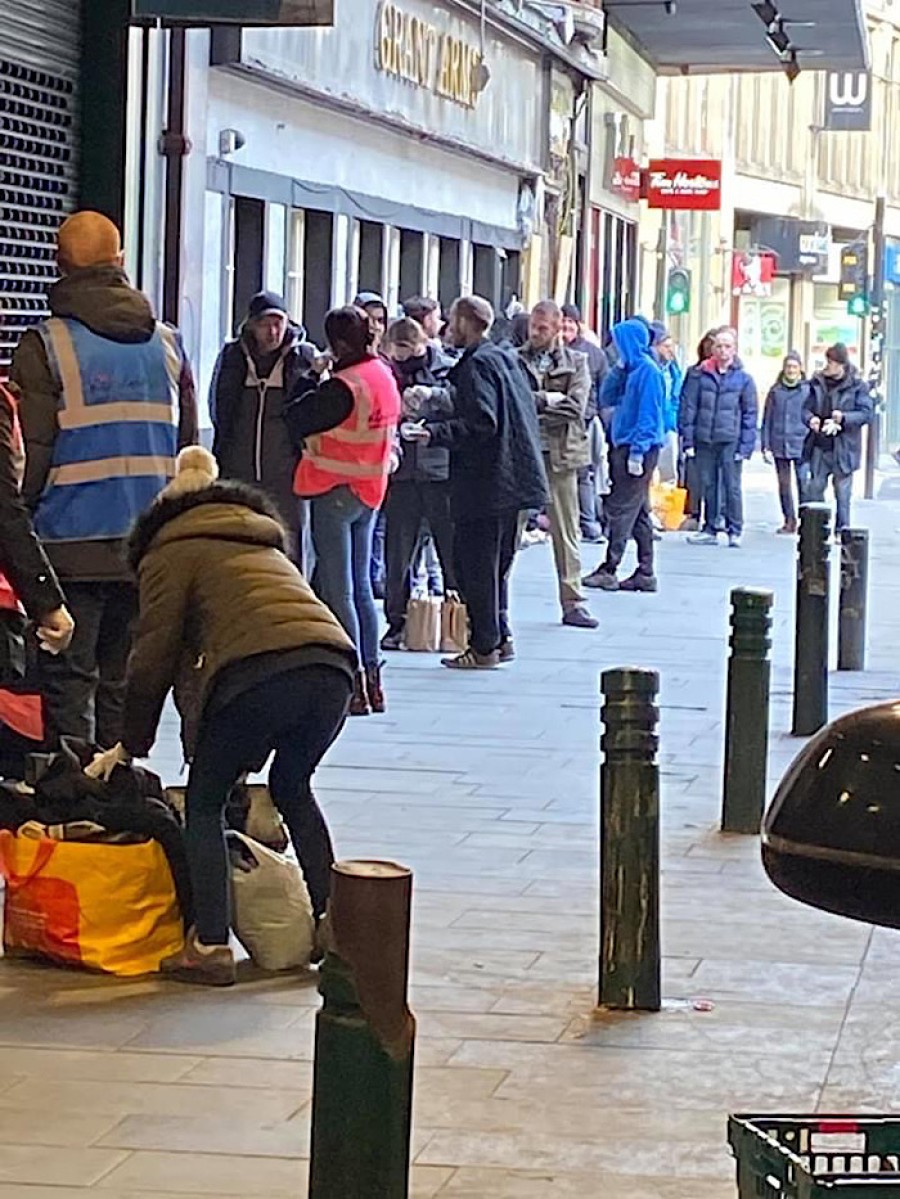 Food is being dispatched to homeless people who gather at Central Station in Glasgow. Photo: Kindness Homeless Street Team Glasgow

Michael Prior, the restaurant’s general manager, is co-ordinating staff and regular customers who are prepping and packing the desperately-needed supplies in their own homes.

He then drives the finished meals to the city’s Central Station every evening where they are distributed by the Kindness Homeless Street Team to up to 100 people still living on the city’s streets.

Like so many other businesses, the popular deli-restaurant on Park Road has been forced to close.

But staff have been determined not to let their skills go to waste.

Michael told Glasgow West End Today: “One of our managers at the Deli, Christine, read about the work of the Kindness Homeless Street Team.

“And as soon as we became aware of their work, we have been doing what we can to help.

“I thought this is a very scary and strange time for us all but can you imagine how scarier it would be without the kitchen cupboard, the fridge, the freezer - no TV, no Netflix and no bed to go to at the end of the night?”

Michael is now spending his days getting supplies and making contact with supermarkets and wholesalers for donations. 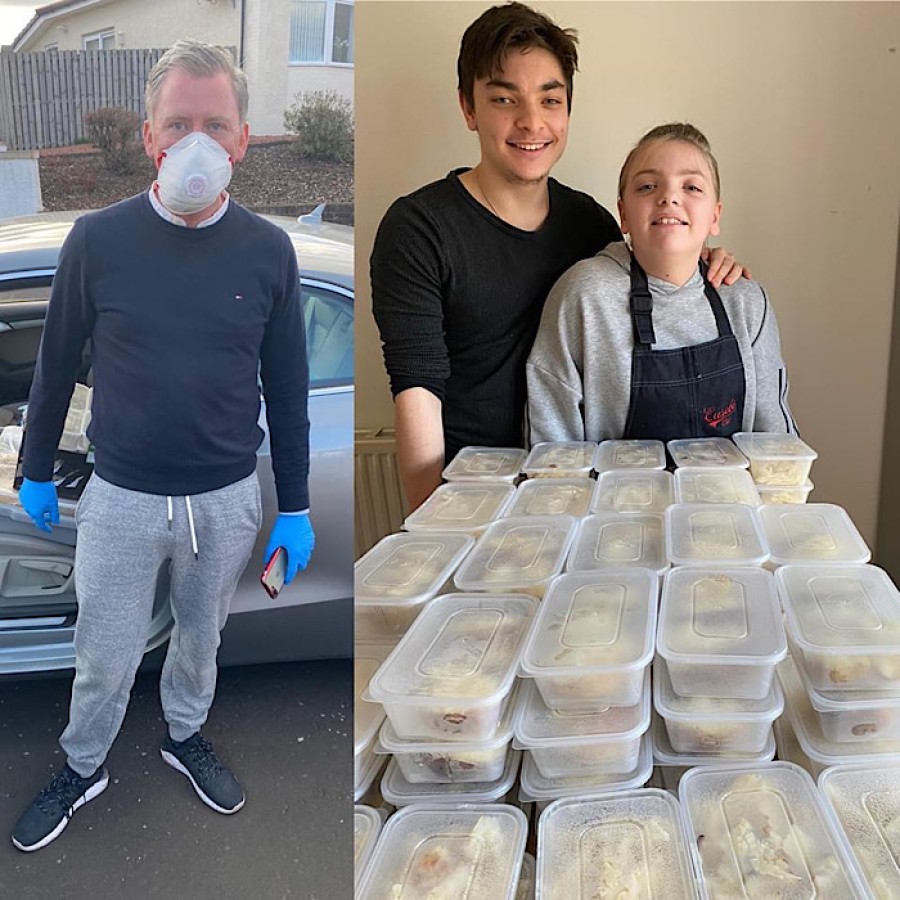 Michael Prior and two of Eusebi's young food helpers.

He said: “Booker have been great a couple of times this week - they have supplied me with all the sandwich fillings and a huge amount of baguettes that have fed all the homeless people on the street.

“Booker called me again today and I have got 90 loaves of bread from them, which is fantastic.

“The team is feeding anywhere between 70 to 90 people on a nightly basis.”

Everyone is taking precautions. All pick-ups of food parcels and supplies are contactless, and safe distancing is being adhered to.

“Everything that I’m doing when I’m out and about is safe, with gloves and a mask.

“The guys are all cooking but it is left at the bottom of the step.

“I deliver the ingredients to the bottom of the steps - there is zero contact.”

On the receiving end of the food is Laura McSorley and her amazing team of volunteers. 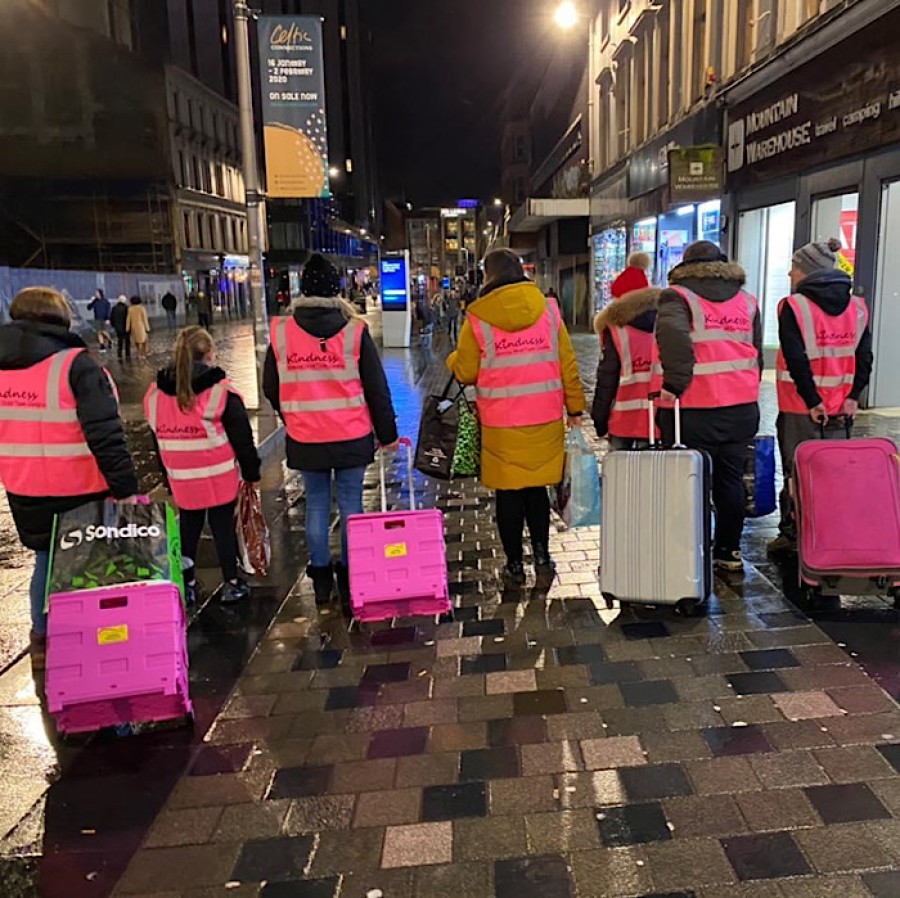 The Kindness Homeless Street Team Glasgow are one of the few groups still active in the city.

Other homeless welfare groups have been hit by the Covid-19 restrictions.

Laura, who works as a pensions manager, said: “We are providing hot foot, clothing, toiletries and basically just a hot cup of tea and a coffee.

“We’re there for a bit of chat - and a bit of normality while the world’s going a bit crazy.”

She said the mood of homeless people had changed due to the circumstances of the lockdown.

'We are providing hot foot, clothing, toiletries and basically just a hot cup of tea and a coffee.

“We usually see people who are quite pleasant to us because they can beg, they can fund their drugs,” said Laura.

“But the begging has stopped and the drugs are drying up - and the mood swings are changing slightly as well, so we see them up and down at the moment.

“They are using alternative drugs that they have not been used to, so their personalities are changing.

“But they are really appreciative of us being there. It’s almost like a lifeline for them.”

Demand has been high. Accommodation that has been offered by local authorities and social housing groups is not yet ready in many cases, so plenty of people are still out on the streets. 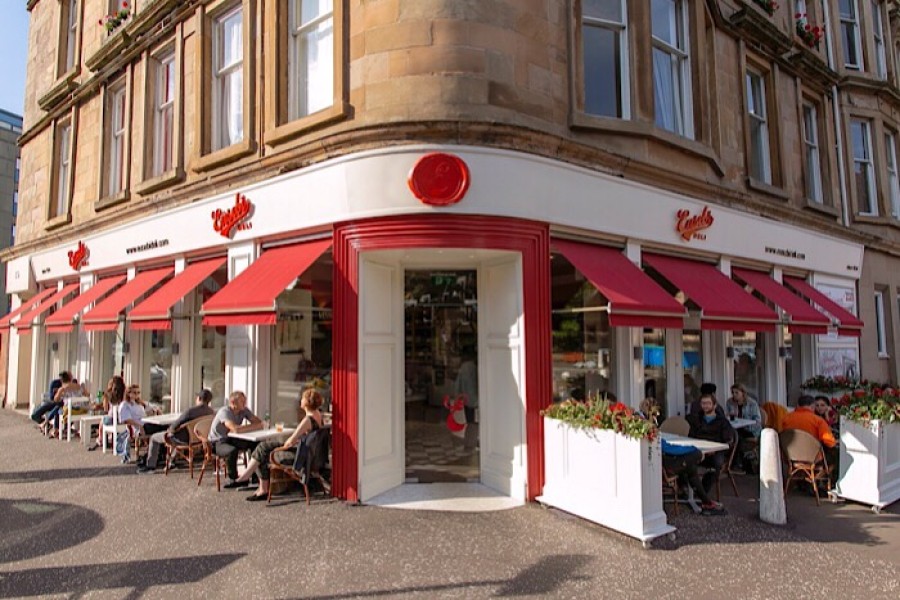 Eusebi Deli before the lockdown.

Laura said: “A queue of 70 to 100 people come and visit us each night - so the demand is massive for them.

“There is uncertainty as well - these people don’t know if they are coming or going.

“We are trying to keep that bit of routine that we can offer them right now, just whilst we can.”

She said they had been overwhelmed with offers of help after putting out a call.

“Eusebi have been absolutely amazing, they have been so good with us.

“This is allowing me to carry on my full-time job as well as going out and doing this every night.”

Deli owner Giovanna Eusebi has been helping to create the meals.

She said: “Eusebis like many business in hospitality have been devastated by COVID.

“We just wanted to turn a negative into a positive and use our kitchen to help the most vulnerable in our community.

“The real heroes are the charity who are on the frontline of delivering much-needed hope.”

The phone number that could save lives this winter

In the past, many young people leaving care have become homeless.